By Anthony, Reese, and Bob

We set out to determine what areas on the Thacher School's campus retain heat at night and which do not. The primary purpose of determining this information was to assess the insulation of the older buildings on Thacher's campus. The newer buildings have been built with sustainable insulation in mind, so those were not our primary concern. However, we were unsure of how well insulated the older buildings were. In order to delve deeper into this topic, we took to the skies to find our answers. We used aerial mapping in order to get a holistic view of Thacher's rooftops. If the rooftops were cool in temperature compared to the surrounding areas, it meant insulation was effective because there was little residual heat from the buildings. Conversely, if the rooftops were relatively warm, it meant the insulation was poor, allowing excess heat to escape the building, so we set out with a balloon and a camera, in order to see what was hot on campus nocturnally and what was not.

In order to assess the state of the insulation of the school's older buildings, we knew we needed to gather a range of images from the sky. However, there was no simple way to do so. iPhones have an internal mechanism that prevents them from being easily controlled remotely, but a video does not give the best quality. After hours of trying different remote control apps, we gave up and used a video. To our pleasant surprise, the video came out with clear, easily decipherable images. While in the end, the solution proved to be relatively simple, it was not without various hurdles. The first phone we used had an unreliable battery, so it would die when we reeled in the balloon. Thus, it did not save the video at all, or the file would come out corrupted. The videos would also often take up half a gigabyte for a 20 minute video, so we had to airdrop the videos onto our computer in order to conserve the iPhone's limited storage space. Another issue we encountered was instability and movement from our camera rig. In order to counteract this, we added a stabilizing fin, comprised of plastic strips from a plastic bottle, to our rig. This fin made the rig slowly turn, due to the wind, as opposed to frantically twisting. Once we dealt with these issues, we sent our balloon up above the buildings we were examining and simply flew it around. When the balloon was in the air, we positioned ourselves to ensure the balloon did not get caught on any trees or power cables. Once we had gathered enough data, we set out to analyze it. As is seen in Figures 1-4, the Seek Thermal camera attachment provides a color spectrum, which is dependent upon what temperatures are present within its field of view. When analyzing the data, we first took a moment to get ourselves acclimated to what exactly we were viewing. This proved to be somewhat difficult, considering how much time we had spent on Thacher's campus prior to this experiment. Rarely do we see buildings from a bird's eye view, and we almost never take videos in thermal images. Once we had a good idea of what we were observing, we were able to actually delve into the analysis. Given our data, we were able to extrapolate the temperatures of vegetation, buildings, paved surfaces, grass fields, etc.

Much to our surprise, the insulation of Thacher's old buildings is effective. The buildings are actually the coldest objects in the camera's field of view. It is important to note that the night we went out to do our aerial mapping was that of a relatively cool day (by southern California standards), so there was either no air conditioning, or a little bit of heating in the buildings we were analyzing. This indicates that although the interior of these buildings is warm, the warmth does not diffuse into the exterior. Another observation, which was less surprising, was that paved surfaces are always the hottest things in the field of view. In Figures 1-4, the most red objects in each image are paved surfaces. This makes sense considering asphalt' tendency to absorb heat. The vegetation does not have any abnormalities in its temperature. It stays more-or-less in line with the atmospheric temperature. 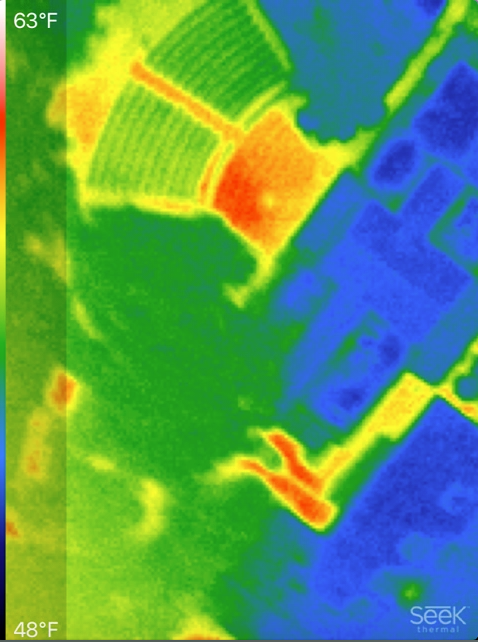 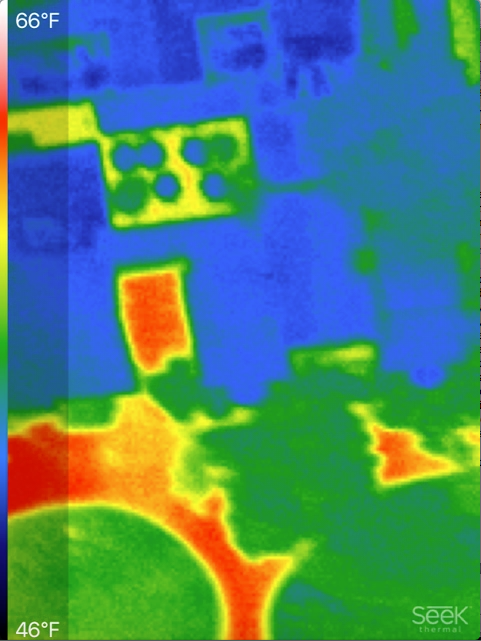 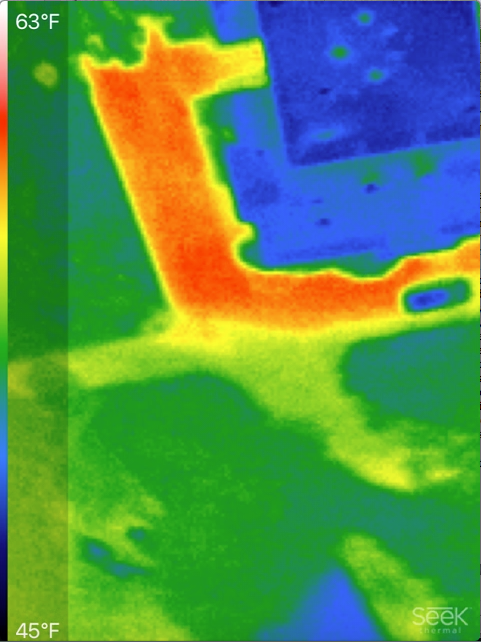 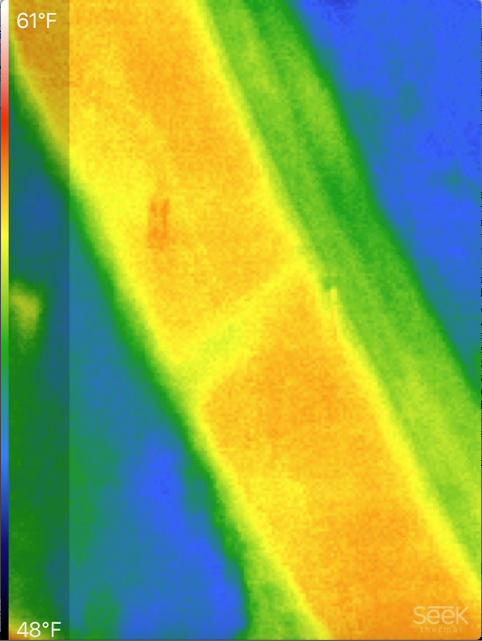 Recommendations and Thoughts on Future Work

For recommendations regarding equipment, our biggest one is to ensure that you are using a phone with ample storage space and a consistent battery life. Also, if you are not looking to spend thousands of dollars on a legitimate thermal camera (at which point, you should just buy a drone), also ensure that you have an iPhone, whose charging port is an 8-pin plug. The Seek Thermal camera attachment only comes with an 8-pin attachment. There is a forum on public lab, which discusses the possibility of converting this 8-pin attachment to the more universal micro-USB.

As far as recommendations with respect to gathering data go, we highly recommend experimenting with the extensive settings the Seek Thermal camera has. We were short on time and unable to see all of what this equipment has to offer, but that does not mean that it would not be beneficial. Also, if you are interested in nocturnal aerial mapping, it is integral that you know the area you are mapping very well because even as Thacher seniors, it was difficult to discern what some of the buildings and roads we were observing were.

When you think of science, you may think of a bunch of people with fancy equipment in a lab. It isn't something people view as accessible for "normal" citizens. However, through this project, we realized that you don't need to have a professional degree in order to make contributions to science. This was a powerful realization for us, and I hope it is, has been, or will be for you as well. We strongly encourage anyone with interest in science to pursue balloon mapping. It is a low-risk, rewarding, and fascinating experience, that requires no degree, yet, has the potential for changing the scientific community.

509 notes
created by NIKIBOPOLOUS over 5 years ago

82 notes
created by Rmeyer over 5 years ago

181 notes
created by liz over 5 years ago