What I want to do Continue to make potential users like Engineers Without Borders teams aware of... patcoyle was awarded the Basic Barnstar by warren for their work in this research note.

Continue to make potential users like Engineers Without Borders teams aware of the Public Lab DIY mapping tools. For those who need up to date, high-resolution imagery, this technique is so accessible that it should not be overlooked.

I did a workshop at the Engineers Without Borders Regional Conference, at Cal Poly on 11/14/15. I've done this the last six years, at the Regional conferences on the Peninsula at YouTube's HQ, in Portland, at Cal Poly, in San Diego and at Davis. I also presented a poster at EWB-USA International Conference.

Again, the 60-minute session went by in a flash. Get ready ahead of time. Get balloons or kites ready. Be ready to attach rig. Be ready to go. Again it paid off. We had trouble in that the small balloon configuration with a pair of small Mobius cameras was pushed horizontally down and across the nearby building. However, we were able to get altitude and reel in our balloons without incidence. However as a result the imagery was relatively low altitude.

Ground based photos are here: 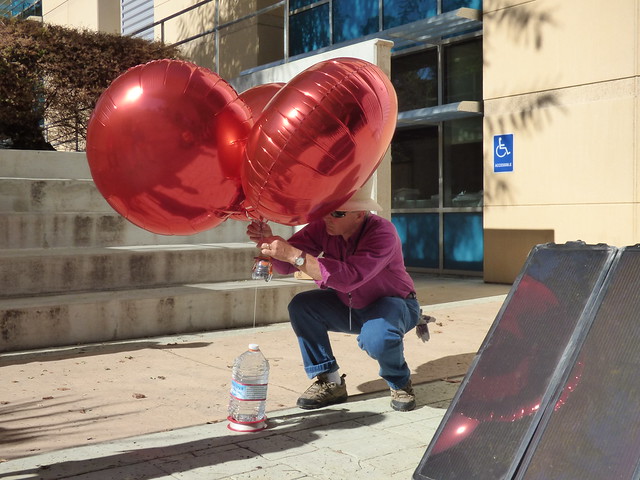 There was interest in the autostitching tools, as a way to speed up the processing. I also noted the AutoDesk's free Windows PC, IOS and Android tablet based 123DCatch replaced pure web-based version, and does offer the ability to process up to 70 images to produce a 3D model.

In the interest of time, I used Photoshop's Photomerge feature to autostitch a set of photos and place the composite image using Mapknitter. Continue to explore where Mobius cameras with non-fish eye lenses and small kites or balloons fit into the tool set and make sense to use. It is worth noting that the Mobius camera rolling shutter and the inherent movement of the camera result in numerous images where linear features are warped or distorted and not optimal, or even useful, for mapping. However, typically a flight results in a sufficient number of relatively undistorted images that are useful.

Kite and balloon aerial photomapping is a useful technique for those who need up to date, high-resolution imagery. This technique is so accessible that it should not be overlooked. TommyJJ commented over 6 years ago

That is absolutely amazing! Good job @patcoyle! Keep up the good work and please share more projects like this one with us :)

509 notes
created by warren over 6 years ago

184 notes
created by warren over 6 years ago