It was a pretty hot summer. In July, the calmness and silence in the heart of Sumava, the biggest and strictly protected natural park in the Czech Republic, was replaced by the sound of chainsaws and massive police action.

It is usually bark beetle calamity that repeatedly raises controversy around the issue of “to cut or not to cut”. In a strong simplification, the bark beetle attacks the trees and kills them. The traditional forest management approach pushes for cutting infected trees to prevent the beetle from spreading. The modern environment-friendly approach suggests to leave nature to deal with itself - some of the temporary generations of trees will die, but in turn will provide cover for a new generation of trees, that will grow stronger and more resilient to any future bark beetle infestations. However, in clear-cut areas which are unprotected from further destruction by storms and wind, new generations of human-planted trees grow to be too weak for resisting future beetle attacks.

Sumava National Park has had to repeatedly face attacks on its strict level of ecosystem preservation. Local business lobbyists backed by political pressures would prefer to see Sumava open to the construction of ski resorts and infrastructure for mass tourism. Therefore, a wild, difficult to access forest obviously does not correspond with such a vision.

The Czech law is clear – any intervention in the protected areas of natural parks that can significantly impact the local ecosystem is prohibited. In extreme cases, exceptions can be granted. This summer, there was a large logging intervention, but no accompanying legal permission. 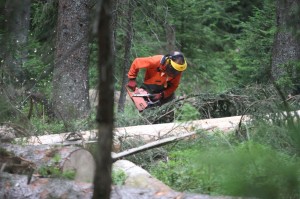 This act triggered activist protests which insisted that companies follow the law. In order to prevent illegal cutting, activists started blocking the cutting themselves. Blockades triggered a massive police intervention that attempted to push activists out of the forest. It took four weeks of chaining, tubing, and arrests. The forest was not saved, but one of the goals-- to draw the public attention and raise discussion around this issue-- was successful. 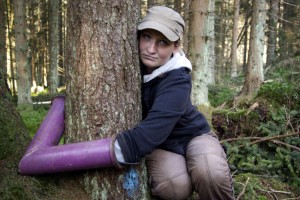 Once the chainsaws went silent, and the police left the forest, the time for proper documentation of the damage had come. Experts observed the cut trees, many of which actually were not attacked by the bark beetle at all. Simultaneously, visual and geographic documentation took place from a ground perspective. 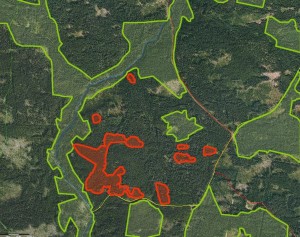 Inspired by the Grassroots Mapping of the BP oil spill, we decided to try to get our own “satellite” imagery in order to document the devastation in its full scale, have something to present it to public, and to use for any legal action that should follow. We reached out to Shannon and Stewart from Public Laboratory and quickly received some initial thoughts, guidance and support. Soon we were on our way back to the forest with balloons, a camera, a bottle of helium and enthusiasm. It is a piece of cake, we thought, planning to cover all areas in one day. The disillusion came quickly: not enough balloons, too much wind and trees all around. Finally, when our awkward tangle of balloons took off, full of excitement and drunk by the success, we refused to pull the balloons back in time. The wind and trees did their job. As a result, we lost balloons and the camera.

Having zero images and no more helium, we left the forest, but did not give up. Next week we were back: with a new camera, bigger balloons and a friend who is a climber and managed to get the old camera from the treetop. The imagery was there, however, we didn’t fly high and long enough to get proper imagery. 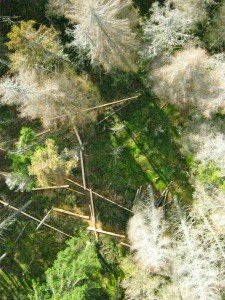 Our second attempt went smoothly. At 5pm the wind stopped, and the balloons went straight up. In 60 minutes, we had one of the areas covered, hoping we had enough good quality images to merge the pictures into a single layer. And we did. Photoshop CS5 did its job perfectly. As we didn’t have too many images, we didn’t need to use the PLOTS MapKnitter. However, one problem did occur. We had nice single layer imagery, but not enough geo specific data to place it correctly onto a map by using MapKnitter. Simply, there were not enough objects that we could use to scale the image to the right location in the right size. For next time, we plan to geolocate the area more properly. We are thinking about placing three white flipchart papers onto the area, geolocating each of them and than placing the merged image with three visible white papers onto the correct coordinates. 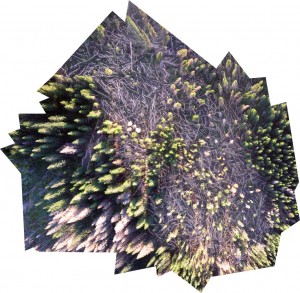 As it stands today, after almost 6,000 trees were cut, the inspection by the Ministry of Environment finally took place, investigating whether the cutting intervention did significantly impact the local ecosystem or not. We now have our own evidence that will be used for three purposes: First, to document the scale of damage. Second, to observe during time how much of the wood will remain in place (despite the fact that the majority of the wood mass should remain on spot, every single tree was cut into logs of precisely 4.1 meters in size, a standard size for trucks. It wouldn’t be the first time when such high-quality wood “disappeared” suddenly). It is the third purpose that is most important – this sends a clear message that we are watching, and that no further logging operation will remain covered-up. 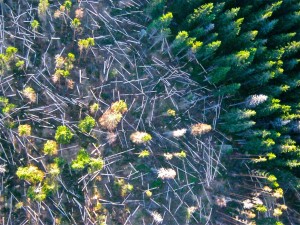 We are also currently launching a Ushahidi based platform (note that this is still a site concept) as a space for gathering all available imagery and testimonies in order to provide a repository for any future reference and planning. Next time, we need to act faster and deploy during the operation, not only after it. Our key lesson learned while mapping: While mapping in difficult to access environments, you need to be ready and well prepared: two cameras and enough balloons (note – dogs hate inflating of the balloons) are essential. We plan to try to use kites next time as well. But the bottom line is: Don’t give up! A list of equipment used for this project: - Camera Canon Powershot A495 - cheap, but little bit too heavy. Need to crack the firmware in order to enable unlimited continuous shooting. - SD card – max 2GB SD card enabled the crack for continuous shooting to work, set up 1 image per 3 seconds (the capacity of 2 GB SD card was just enough for some 20-30 minutes of ballooning). Some one third of pictures was sharp enough which was sufficient. - 5l helium bottle (just enough for one ballooning session) - 2 party balloons 160cm size, one 90 cm size (at least another three as a backup). - Light string 150 meters (wish we had more) - Plastic bottle as a cover - Laptop - Tons of AA back-up batteries

46 notes
created by liz over 5 years ago

9 notes
created by liz over 5 years ago